Kazuma Tanaka and his wife Atumi hosted the Australian Wagyu Association 2022 Japan Wagyu tour group during a visit on Wednesday.

Tanaka Chikusan Farm in Shogo Prefecture raises Wagyu cattle, feeding some themselves and selling others as feeders.

As Head of MLA Japan Region Scott Walker explains in a separate tour post this week, unlike their Korean neighbors, the Japanese have yet to quickly embrace e-commerce in beef sales, as they “prefer to buy with their eyes,” but the Tanaka family is establishing a healthy niche.

Mr. Tanaka has amassed a large following on social media for his business and lifestyle, also supporting his family’s beef selling platform.

Like many cattle breeders in this region of Japan, Tanaka Chikusan Farm focuses solely on the Tajima strain of Wagyu genetics, rather than mixing with other Wagyu strains like Kadaka and Shimane. The local county of Mikata is considered by locals to be the true source of origin of Tajima cattle.

Tajima are smaller framed, slower growing Wagyu but are known to produce the best marbling performance.

Neighboring farmers fiercely guard the reputation of their local Tajima – so much so that cattle bred in Tanaka’s home valley are bred only from lines from that valley. The next valley does the same. Rivers, like the nearby Yada, also helped further isolate local lineages from those only a few miles away, as the crow flies.

Tanaka’s small estate is situated high up in a valley in the mountains (elevation about 2700 feet), surrounded by incredibly scenic countryside in a secluded location.

The Tanakas raise around 100 breeding cows on a rented plateau atop a nearby mountain during the warmer months, with the main property comprising a breeding barn and grower/finisher barn. The area can be covered with up to two meters of snow in winter. Some of the offspring are kept to be fed at home and others are sold.

On the sidelines, Mr. Tanaka is also a contract hoof trimmer – a regular requirement on barn cattle operations in Japan.

The cows are brought into the breeding barn for the winter, and the later stages of gestation and calving, being separated at around two months of age, to re-mate.

The Tanakas also have a separate business fattening older cull cows, for a specialized beef market. Some cows in this program were up to 17 years old and would be slow-fed for more than a year before slaughter.

The Tanakas said the older cows produced slightly firmer, but tastier meat than the traditional Wagyu steer/heifer trade. Meat color could be darker, but was managed with ration handling, particularly the use of dry rice straw – no wet ingredients. The marbling score is usually around BMS 4-5.

“Tajima is a late-ripening meat – the older it gets, the better it gets,” Tanaka san said.

At retail, cow meat sold “like hotcakes” for around 3,000 yen per 100g (equivalent to around 250 Australian dollars/kg).

The couple said finishing cull cows is a growing part of the family’s beef business. 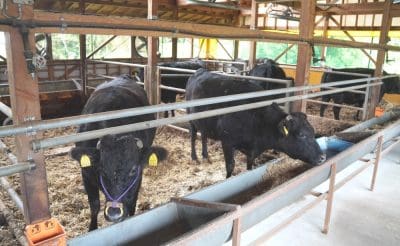 Steers approximately 28 months old, about to complete their program

Given the close genetic relationships within local breeding programs, questions inevitably arose from the AWA tour group about inbreeding and lineage selection.

They were told that local cattle usually had an inbreeding coefficient of around 25%. Male and female cousins ​​(line breeding) rarely occurred, as they were considered “without merit”.

Mr Tanaka said that 20 years ago the marbling performance of local cattle was lower than it is today.

“Cattle rated A5 (the highest Japanese grading score for marbling and yield) were much lower. But people were focusing too much on marbling, and that’s one of the reasons we have weaker calves today,” he said.

Some breeding programs have recorded a loss of 0.5-1pc of calves, but others could be 10pc – but not necessarily related to inbreeding alone. 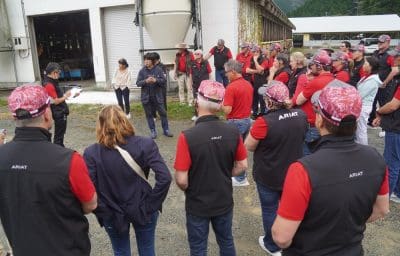 But in the Tanakas’ own program, the emphasis has shifted from breeding for isolated marbling to breeding better all-around cattle (using less fashionable genetics), balancing cows for better longevity and better calf performance.

Importantly, however, the purity of Tajima lines remained of critical importance in local breeding programs, the group was told, as local Mikata cattle were considered a pure source of Tajima for use throughout Japan. .

Tanaka San is atypical, in that he is a first-generation cattle rancher, from a non-farming family near Kobe. The couple have owned their farm for 22 years, having graduated from Hokkaido Agricultural University before pursuing their dream of raising cattle.

In discussions with the tour group about popular genetics, he was familiar with Monjiro, a popular foundation bull used in Australian Wagyu breeding programs.

Not far from Tanaka Farm is an impressive museum dedicated solely to the region’s Tajima strain of Wagyu cattle, bred in the area for at least 1,300 years.

Highly interactive exhibits showcase the origins and history of Tajima cattle in the region, how they are raised, fed, and sold, and even how to best prepare and cook Tajima beef at home.

A pedigree in the museum has traced 12 generations of famous Tajima cattle, including some of the lines currently used in Australia, including Yasufuku, Michifuku, Tanufuku and others.

More photos of the museum and the Tanaka Farm tour below. Click on images to enlarge. Double click to enlarge further. 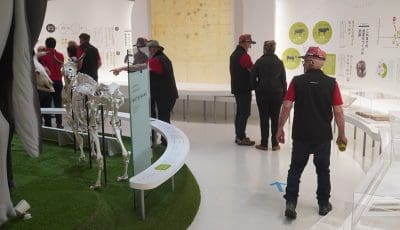 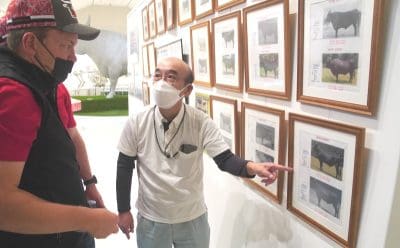 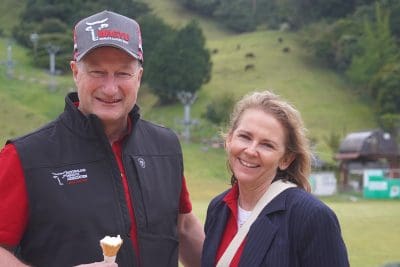 Steve and Nat Gibbons, members of the AWA Wagyu Group of Victoria, in front of Wagyu cows grazing on a snow covered alpine pasture ski slope near the Tajima Museum

Doug Lighthouse Doug Lighthouses | for editor and editor If you’re reading this and your organization is still standing, congratulations! The worst of the pandemic, physically speaking, is behind you and you have weathered an unpredictable global crisis for over two years. And your reward is an impending recession. Obviously, there is still much debate […]

Global Warming Solutions is making progress on the business plan.

Who is Kathryn Burn and what is her business plan?

Kathryn Burn is one of four female entrepreneurs to reach week 11 of The Apprentice 2022, and she’s the first all-female finalist since 2015. She’s joined by Stephanie Aflek, Harpreet Kaur and Brittany Carter in this week’s episode: The Interviews. Find out everything you need to know about the final four here. Steff and Kathryn […]